Alexis Glick is an American television host who was the producer of Money for Breakfast and The Opening Bell on the Fox Business Network, as well as the Vice President of Business News.

In December 2009, she left the channel. Glick has also created the GENYOUth Foundation, a non-profit organization devoted to nurturing children’s health and wellbeing through better education and physical activity.

Glick started her career as an analyst with Goldman Sachs in the Stock Group. She was also an executive at Morgan Stanley, where she was in charge of floor operations at the New York Stock Exchange, making her the first and youngest woman to oversee such an enterprise with a bulge bracket company.

Glick sold consumer and leisure securities, utilities, and real estate investment trusts and, most prominently, financial properties, including banks, credit card portfolios, government entities, and Morgan Stanley insurance holdings. She was also one of the top performers in the company’s Classified Stock Trading Desk from 1998 to 2001. Glick served as a temporary host for the third hour of NBC’s Today Show in 2006. She was also an alternative anchor at Early Today in 2005 and an intermittent anchor at MSNBC Live. Previously, Glick was CNBC’s senior business reporter.

On September 12, 2006, it was reported that Glick would join the Fox News Channel as Director of Business News. Glick began working on the Fox News show in July 2007. She met global leaders such as President Barack Obama, Secretary of the Treasury, then-Secretary of Commerce Gary Locke. Henry Paulson, Prime Minister Stephen Harper of Canada, and former head of state of Ireland, John Bruton.

On 23 December 2009, Glick revealed that she was leaving the Fox Business Network. Glick acted as a temporary host for the third hour of the 2006 NBC Today Show. It was also an alternate anchor at Early Today in 2005 and an occasional anchor at MSNBC Live. Previously, Glick had been CNBC’s senior business correspondent. On 12 September 2006, it was announced that Glick would join the Fox News Channel as Director of Business News. Glick started reporting on the Fox News show in July 2007. She worked with world figures such as President Barack Obama, Secretary of the Treasury, and Secretary of Commerce Gary Locke. Henry Paulson, Prime Minister Stephen Harper of Canada, and John Bruton, former head of state of Ireland. 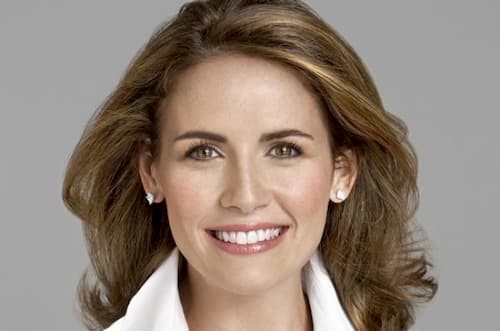 Glick is married to Oren Glick, a Jew, and the founder and president of Shoot Digital, a New York City photography firm. There are four sons, including Logan, Moon, Kyle, Slate, and Sheila.

Glick has an estimated net worth ranging between $1 Million – $5 Million which she has earned through being a journalist.