Carole Baskin is an American animal rights activist and the founder and CEO of Big Cat Rescue, the world’s most influential, accredited rescue facility for exotic cats. Baskin rose to fame after being featured in the 2020 Netflix documentary series Tiger King about Oklahoma-based private zoo operator Joe Exotic.

She and her family volunteer for the Tampa-based nonprofit as unpaid staff and have 100+ volunteers and a dozen interns from around the world. Since 1992, they have successfully rehabilitated and released a number of bobcats and other native animals. Baskin and the organization have been featured on CNN, “The Today Show,” Discovery, Animal Planet, People Magazine, Sports Illustrated, local media outlets, and many more national and international programs.

Baskin recently gained public attention in “Tiger King: Murder, Mayhem and Madness,” Netflix’s documentary series about Oklahoma-based private zoo operator Joe Exotic in a true murder-for-hire story from the underworld of big cat breeding. The Netflix series follows both Baskin and Joe Exotic, filming their ongoing and escalating feuds over exotic animals in private zoos. Following the series’s release, Carole Baskin has been the subject of internet memes and conspiracy theories related to the disappearance of her second husband, Don Lewis. 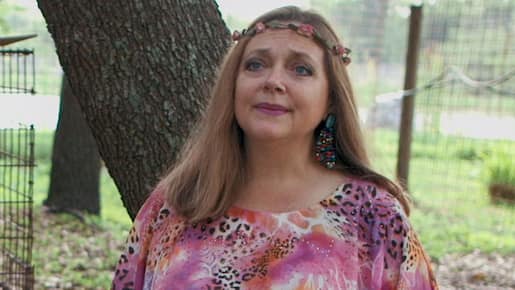 Baskin is married to Howard Baskin since 2004. She met her current husband in November 2002 at a kick-off party for the newly formed No More Homeless Pets organization. Howard joined Big Cat Rescue soon after as chairman of the advisory board. In November 2003, he proposed to her, and they married in November the following year.

Baskin was married to Don Lewis from 1991-2002. She met her second husband, Don, in 1981 at the age of 19 when she threw a potato at Murdock as he attempted to attack her. Baskin ran out of their home barefoot and met Don Lewis, on Nebraska Avenue in Tampa.

The two engaged in an affair while both were still married. Carole became one of Don Lewis’s many girlfriends and substantially grew his wealth by helping him buy and sell real estate in 1984. Later, the pair divorced their respective spouses and subsequently married in 1991.

Lewis continued to live with Baskin afterward and used to tell her multiple times that he wanted a divorce, but she did not think he was ever serious about it. Baskin claimed he was diagnosed with bipolar disorder months before he vanished.

In August 1997, Don Lewis disappeared and was declared legally dead in 2002. A dispute followed between Baskin and Lewis’s children over the estate, with Baskin prevailing as the primary inheritor. As of 2020, the case of Lewis’ disappearance is still open.

Baskin’s first husband was Michael Murdock. The two were married from 1979-1990. Baskin first moved in with Michael Murdock, her boss at the department store where she worked, when she was 17 years old. They got married on April 7, 1979. Baskin has said that she never loved Michael and married him only because her parents were disappointed that they had been living together outside of marriage. She became pregnant soon after and had a daughter.

Baskin has a daughter named Jamie Veronica Murdock who was born on July 16, 1980. As shown in Tiger King, Jamie Veronica Murdock is still very much a part of her mother’s life. She runs the sanctuary as its president. In one video on the Big Cat Rescue Youtube page, Jamie is shown with the title “President, Big Cat Rescue,” as she talks about the health of one of the park’s animals.

Along with working for Big Cat Rescue, Baskin’s daughter runs an art studio called Dancing Butterfly Arts. On her Etsy page, Jamie describes herself as nature and wildlife photographer and artist who uses her creativity on acrylic paintings, mix-media projects, paw-print art.

Baskin has an estimated net worth of between $1 million-$10 million which she has earned through her career as an animal rights activist and being the founder and CEO of Big Cat Rescue.

People believed that Baskin was responsible for the disappearance and killing of her husband. No charges were set against her for Lewis’s disappearance, but that didn’t stop Exotic from constantly accusing her of murdering her husband. However, keep in mind that such allegations are unfounded without the proper evidence. Currently, there is no enough evidence that confirms that Don Lewis’ disappearance was Carole’s fault.

Baskin is not dead she is still alive.