Francis Suarez is an American attorney and politician currently serving as the 43rd mayor of Miami. Suarez was elected on November 7, 2017, with 86 percent of the vote.

Suarez who is the first Miami-born mayor is a registered Republican, but the office of the City of Miami Mayor is nonpartisan. Previously, Suarez served as City of Miami Commissioner for District 4, a position he held since he was elected in a runoff election on November 17, 2009.

He also serves as Vice-Chair of the Miami-Dade Transportation Planning Organization (TPO) and is the former President of the Miami-Dade County League of Cities. In his role at the TPO, he championed the Strategic Miami Area Rapid Transit (SMART) Plan, which was unanimously approved.

Suarez attended Immaculata-Lasalle High School in Coconut Grove. He then attended Florida International University where he earned a bachelor’s degree in finance, graduating in the top ten percent of his class. 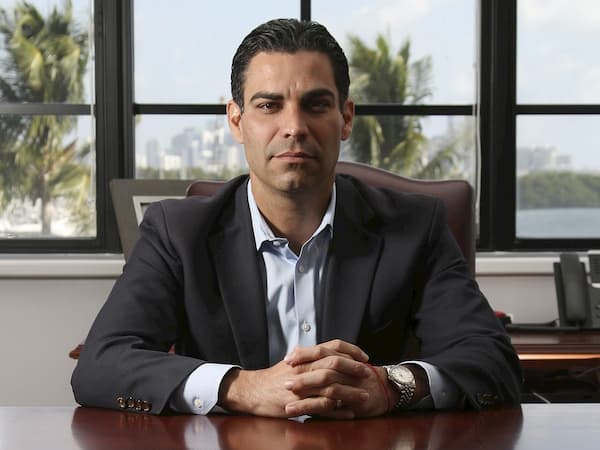 Suarez is the son of Rita Suarez and Xavier Suarez former Miami Mayor and current Miami-Dade County Commissioner Xavier Suarez. He was born at Mercy Hospital in Miami, Florida. Suarez has three siblings.

Suarez is married to Gloria Fonts Suarez and the couple is blessed with two children, a son, Andrew Xavier, and a daughter, Gloriana Pilar.

On March 2, 2020, Francis Suarez responded to the ongoing coronavirus outbreak by announcing preparations for a potential outbreak in Miami. Though no cases had been reported in Miami by then, two cases were confirmed by the U.S. Centers for Disease Control and Prevention (CDC) in other areas of the state of Florida.

On March 4, 2020, he announced plans to cancel the upcoming Ultra Music Festival, stating that the tourists attending would greatly enhance the likelihood of Miami having cases of COVID-19. On March 6, 2020, he and the Miami municipal government responded to the outbreak, which by then had resulted in even more confirmed coronavirus cases in the state of Florida, by cancelling not only the upcoming Ultra Music Festival, but also the upcoming, local Calle Ocho Festival as well.

On March 13, 2020, Suarez tested positive for Coronavirus. He was one of several politicians, including President Donald Trump, Miami-Dade Mayor Carlos Gimenez and Sen. Rick Scott who interacted with Brazilian President Jair Bolsonaro and his staff during a visit to South Florida last week.

Fabio Wajngarten tested positive on Thursday after returning to Brazil, and Suarez went into isolation Thursday after learning of Wajngarten’s results. He confirmed it during an interview with Miami Herald. Suarez is the second person confirmed to be infected in Miami-Dade County.

“It is confirmed that I have the coronavirus,” Suarez said. “I did test positive for it.”

Here is my statement regarding my decision to self-quarantine.