She previously appeared in the first episode of Ready for Love, on which her half-brother, Ben Patton, was starring. Before going into real estate, Fletcher was a premed major at Baylor University.

Fletcher was a contestant on Ben Higgins’ season of The Bachelor. Ben Higgins confessed love for both her and Lauren Bushnell, but ultimately he chose Bushnell in finale.

On March 14, 2016, Fletcher was announced as the Bachelorette during After the Final Rose. In the end, she chose former pro-quarterback Jordan Rodgers over runner-up Robby Hayes. The couple resides in Dallas, Texas.

In September 2018, it was announced that Fletcher and her fiancé, Jordan Rodgers, would appear in a Kin web series Engaged with JoJo and Jordan, described as a combination of reality TV and DIY home decor. 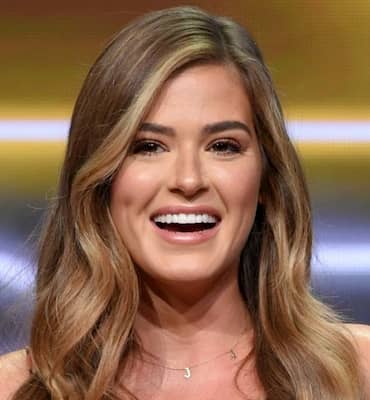 Fletcher appeared in one episode of The Bachelor Winter Games where she judged a kissing contest along with Arie Luyendyk and Rachel Lindsay.

Fletcher is 30 years old as of 2020. She was born as Joelle Hannah Fletcher on November 1, 1990, in Dallas, Texas, United States. She celebrates her birthday on the 1st of November every year.

Fletcher is the only child of physician parents Soraya Fletcher and Joseph Fletcher. Her mother is from Iran. She has three older half-brothers Ben Patton, Matt Patton, and Peter Fletcher, and a half-sister Rachel Fletcher.

Jojo is in a relationship with Jordan Rodgers. The two began dating in 2016 and Jordan proposes to JoJo on The Bachelorette Season 12 Finale in 2016. After a four year engagement, the two planned to wed on June 13, 2020. However, due to the COVID-19 pandemic in the United States, the couple postponed their wedding to 2021.

Fletcher has an estimated net worth of between $1 million- $5 million as of 2020.

Jojo is a contemporary lifestyle collection by Jojo Fletcher founded in 2017. It is all about fitting one’s personality and mood – from feeling bold and empowered to feeling feminine and flirty. Fletch collection offers a range of versatile pieces that enhance your individuality from feminine prints, fun necklines, wearable separates and bold evening looks.

Jojo was given a diamond engagement ring weighing in at more than 3.5 carats by her fiance on the season finale of the ABC reality show on Monday, August 1. The Neil Lane bling, picked out by Rodgers, features an oval-cut center stone and pavé diamonds along with the band. According to a source, the ring costs about $85,000.

JoJo will be replacing Chris Harrison as host of 16 seasons of Bachelorette. Below is a list of the contestants.