Mason Ramsey is an American singer and voice actor who is best known for his single “Famous”. Ramsey was signed to Big Loud Records in 2018 after gaining Internet fame from a viral video of him yodeling Hank Williams’ “Lovesick Blues” at a Walmart in March 2018.

In March 2018, 11-year-old Ramsey was caught on camera singing “Lovesick Blues” in a Walmart store in Harrisburg, Illinois. Within a few days, videos of Ramsey’s performance collectively garnered over 25 million views and he became a viral sensation and internet meme.

His performance sparked new interest in Hank Williams’ 70-year-old recording of the song and in March Rolling Stone reported that Spotify’s Viral 50 chart for the U.S. ranked Williams’ “Lovesick Blues” at number three, and number four around the globe. 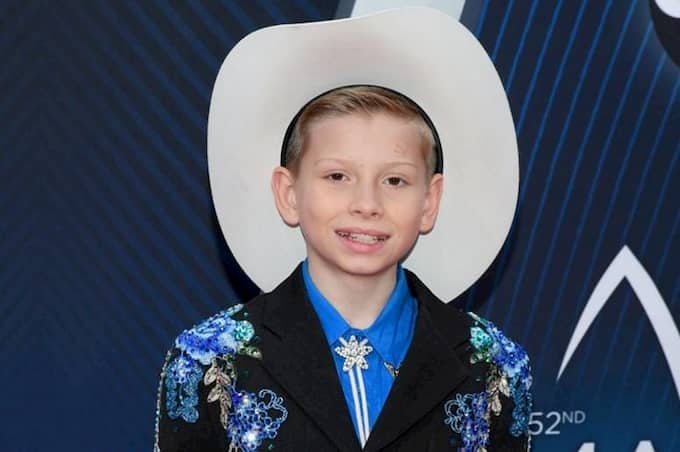 As a result of Ramsey’s newfound fame, he made an appearance on The Ellen DeGeneres Show. Saying that his dream was to appear on Grand Ole Opry one day, DeGeneres surprised him by saying he had been booked for the following weekend.

On April 13, 2018, American DJ Whethan brought Mason out during his set at the 2018 Coachella Valley Music and Arts Festival in Indio, California. In late April, Ramsey signed a record deal with Atlantic Records and Nashville-based label Big Loud.

Ramsey was born in Golconda, Illinois, United States to John Karen Ramsey and Karen Ramsey. He started living with his grandparents Ernest and Francis Ramsey at just three weeks old cause of his parent alienation. More details about his parents will be updated soon.

Ramsey has an estimated net worth of $500 thousand USD which he has earned through his successful career as a singer and voice actor. His YouTube Channel annual income ranges from $21,000 to $336,000.

Ramsey is excited to go to his first-ever Grammy Awards on Sunday (Jan. 26), but the 13-year-old is especially excited about the possibility of meeting Blake Shelton.

When asked who he is most excited to see, he immediately cites Shelton and pop singer Ariana Grande. “I’ve been trying to meet him [Shelton] for a while now, a really long time,” Ramsey says in an interview with Stage Right Secrets.

“I’m one of his biggest fans,” he confesses. “Most people back home, where I live, are really inspired by him. I’d just say, ‘Blake, I’m your number one fan, how are you doing today?'” Ramsey says with a laugh.

Ramsey is also performing at the 2020 Grammys, and he appears to be over the moon.

“I couldn’t believe it, this is the first time I’ve been on the Grammys and it’s amazing,” he gushes. “I’ve been dreaming to be here at the Grammys for so long. I couldn’t believe it… literally.” The crooner, who shot to fame when a video of him singing Hank Williams songs at a local Walmart went viral, shared that he has been watching the awards show with his family since he was five years old.

Ramsey is set to perform a remix of “Old Town Road” during the show alongside Lil Nas X and Billy Ray Cyrus, Diplo and K-Pop sensation BTS. Each of the artists has recorded a remix with Lil Nas X on his breakout hit, and this will be the first time they all come together to perform the song.