Cordero also played the role of Dennis in Rock of Ages on Broadway in 2012 and on tour. In March 2016, Cordero joined the Broadway production of Waitress, playing the role of Earl. He then left Waitress to join the Broadway premiere of the musical A Bronx Tale, playing Sonny at the Longacre Theatre starting on November 3, 2016. 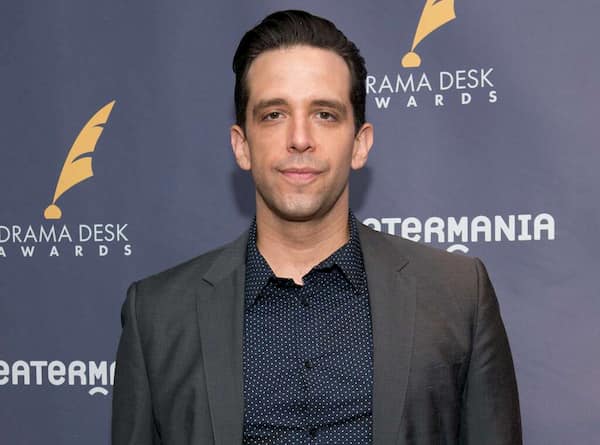 Cordero is married to Amanda Kloots and the couple is blessed with a son, Elvis Eduardo, born on June 10, 2019. The couple first met in 2014 and tied the knot in September 2017, in New York. His wife is a fitness trainer.

On Sunday April 19, 2020, his wife, Kloots, shared an Instagram video of her and Cordero’s first dance from their wedding night. In the caption, she vowed that the couple would dance together again. “Part of our wedding dance ❤️ that our friends @swaywithmeny choreographed for us. I love dancing with you @nickcordero1and we WILL dance again!” she wrote.

Part of our wedding dance ❤️ that our friends @swaywithmeny choreographed for us. I love dancing with you @nickcordero1 and we WILL dance again!

Cordero has an estimated net worth of around $1 million which he has earned through his successful acting career.

In April 2020, he tested positive for COVID-19. On Saturday, his wife reported that he was in critical condition, on a ventilator, and being treated with dialysis and extracorporeal membrane oxygenation. He spent 18 days in intensive care sick with COVID-19. On Thursday, his wife gave an update indicating that she was unsure “if he’ll be able to walk again” due to the “blood flow issues” in his leg.

On April 18, 2020, Cordero’s right leg was amputated as a result of complications from his illness. Later Saturday, his wife shared an update that his surgery had gone well.

“He made it through the surgery, which is really big because obviously his body is pretty weak,” Kloots said. “Hopefully he’ll just kind of relax and rest.”
Share