Phyllis Lyon was an American Lesbian Pioneer. She and her spouse, Del Martin, were an American lesbian couple known as feminist and gay-rights activists. She is a pillar of the San Francisco LGBTQ community and a civil rights pioneer.

She had a degree in journalism from the University of California, Berkeley, earned in 1946. Together with Martin, Lyon co-founded the Daughters of Bilitis, the nation’s first lesbian organization and was a journalist who began her career as a reporter in 1946.

During the 1940s, Lyon worked as a reporter for the Chico Enterprise-Record, and during the 1950s, she worked as part of the editorial staff of two Seattle magazines. She changed countless lives for the better.

Lyon was at the forefront of the LGBTQ rights movement—fighting for a world in which people can marry who they love and live without fear of discrimination. Through decades of organizing, activism, and writing, she helped advance civil rights protections, created robust support networks for LGBTQ people, and established political and advocacy organizations that continue her work to this day. Importantly, she was a symbol of hope and courage for San Franciscans and people around the world.

On June 26, 2015, when the U.S. Supreme Court ruled gay marriage legal, Lyon “laughed and laughed when told the news. ‘Well how about that?’ she said. ‘For goodness’ sakes.'” 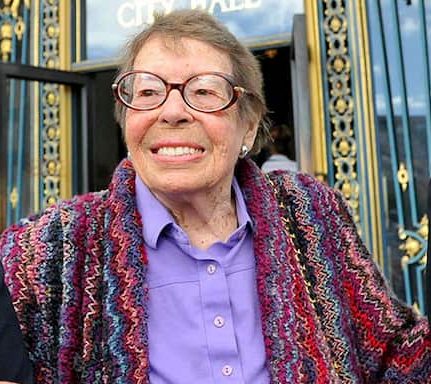 Lyon was married to Del Martin from 2004 till the time of her death on August 27, 2008. The two met in 1950, became lovers in 1952, and moved in together on Valentine’s Day 1953 in an apartment on Castro Street in San Francisco. They were the first same-sex couple to be married by Gavin Newsom during the so-called Winter of Love on February 12, 2004, at San Francisco City Hall after 54 years together.

The couple married again on June 16, 2008, in the first same-sex wedding to take place in San Francisco after the California Supreme Court’s decision in In re Marriage Cases legalized same-sex marriage in California. In August 2008 Del Martin died from complications of an arm bone fracture in San Francisco.

Lyon’s net worth is currently under review and will be updated as soon as the information is available.

Lyon died on April 9, 2020, of natural causes at the age of 95. Sen. Scott Wiener announced the news of her death in a statement on Thursday.

“We lost a giant today,” Sen. Wiener said. “Phyllis Lyon fought for LGBTQ equality when it was neither safe nor popular to do so. Phyllis and her wife Del Martin played a crucial role winning the rights and dignity our community now enjoys. We owe Phyllis immense gratitude for her work. Rest in power.”

“I am saddened by Phyllis Lyon’s passing. She was a true champion of LGBTQ rights and San Francisco was incredibly lucky to have her leadership and activism.