Ray Cortopassi is an American anchor/reporter working for FOX59 in Indianapolis since joining the team in 2009. He anchors the morning news from 7-10 a.m. alongside Angela Ganote and First at Four together with Beairshelle Edmé. He has been serving as a television broadcaster for more than 25 years.

Before moving to Indianapolis, Cortopassi worked as a reporter and anchor at TV stations in Las Vegas, Nevada, and Traverse City, Michigan. More than anything, Cortopassi loves narrating a good story and during his years in Indianapolis, he has been honored with Associated Press awards and Emmy.

Originally from Dolton, Illinois, a south suburb of Chicago, Cortopassi likes deep dish pizza, and having grown up as the son of a piano teacher, Cortopassi picked up the drums and loves alternative rock-n-roll. After graduating with a journalism degree from Columbia College Chicago, Cortopassi studied acting and is now the managing director of the Off-Main Street Players, a community theatre he co-founded in Zionsville, Ind. There, he as well served as the executive director of the Chamber of Commerce from 2008 until 2011.

Cortopassi is not a good golfer, but he thinks he is a decent tennis player (ranked most recently as a 4.0 player by the U.S. Tennis Association). Cortopassi has a hard, but inconsistent serve…and gets rattled easily by recurring double faults.

Ray likes to keep his personal life private hence has not yet disclosed the year and month he was born. It is therefore not known when Ray celebrates his birthday.

Cortopassi’s height is not yet disclosed. 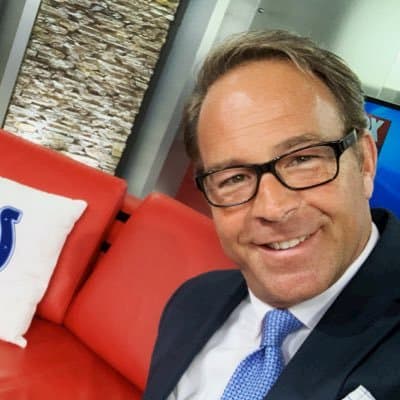 Ray has managed to keep his personal life away from the limelight hence he has not disclosed any information about his parents. It is also not known if Ray has any siblings.

Cortopassi is married to Leslie and the couple is blessed with four children. Their kids them extraordinarily busy; half the time parenting, the other half chauffeuring.

Cortopassi has an estimated net worth ranging between $1 Million – $5 Million which he has earned through being an anchor/reporter.

Cortopassi will be leaving Fox59 for WGN. He will be the new co-anchor of WGN Evening News at 5 p.m. and 6 p.m., WGN News at Nine and WGN News at Ten alongside Micah Materre starting Sept. 28.

“I am honored to join Micah and the WGN family,” Cortopassi said. “It’s been my dream and our family’s wish to come back since leaving my hometown in the mid-1990s. I’m humbled and thrilled by the chance to work in the best newsroom in America and grateful to join a team of journalists who know the value of telling Chicago’s story.”