Rebekka Schramm is an American Emmy award-winning journalist serving as news reporter on the CBS46 Morning News (4:30 to 7 a.m.) and on CBS46 News at Noon. She joined the news team in  2001. Rebekka’s career in broadcasting began at a young age. She was just 15 years old when she landed a job at a radio station in her hometown of Eufaula, Alabama. She was the “commercial girl,” writing, voicing, and producing radio spots for WULA.

Rebekka’s broadcasting career began while she was pretty young. When she was just 15 years old, she landed a position at a radio station in her hometown of Eufaula, Alabama. She worked as a “commercial girl” for WULA, writing, voicing, and making radio commercials. After graduating from Auburn University, she landed her first television job as a video journalist for WTVM-TV in Columbus, Georgia. In less than a year, she was in front of the camera, reporting on a variety of topics, including education.

She worked for WVEC-TV as an anchor and reporter. She covered several Navy farewells and homecomings. As a Navy wife, such stories hit home for her. When her husband’s military service ended, they relocated to Atlanta to be closer to her family. Rebekka joined CBS46 in 2001. Rebekka has reported on a wide range of topics for CBS46 News, including crime, courts, and politics. She also enjoys addressing problems that affect Atlanta families and neighborhoods.

Schramm works at CBS46 where she works alongside other famous CBS46 anchors, reporters, meteorologists, and sports anchors including;

She was born in the United States of America. Apparently, She likes to keep her personal life private hence has not yet disclosed the year and month she was born. It is therefore not known when she celebrates his/her birthday. 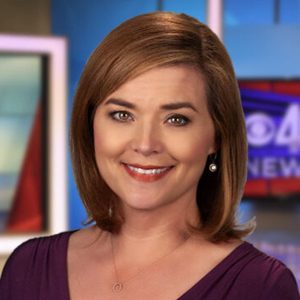 Rebekka has managed to keep her personal life away from the limelight hence she has not disclosed any information about her parents. It is also not known if she has any siblings.

She is happily married to her husband, and they have two children, a son, and a daughter.

Schramm is an American Emmy award-winning journalist currently serving as a news reporter on the CBS46 Morning News (4:30 to 7 a.m.) and on CBS46 News at Noon. She joined the news team in  2001.

She has an estimated net worth ranging between $1 Million – $5 Million which she has earned through being a journalist.