Savannah Guthrie is an Australian-born American broadcast journalist and attorney who is currently working as the main co-anchor of the NBC News morning show Today, a position she has held since July 2012.

She joined NBC News in September 2007 as a legal analyst and correspondent, regularly reporting on trials throughout the country. From 2008 to 2011, she served as a White House correspondent and between 2010 and 2011 as co-anchor of the MSNBC program The Daily Rundown. After that, she was announced as the co-host of Today’s third hour alongside Natalie Morales and Al Roker.

In 2018, she was included in Time magazine’s 100 Most Influential People. 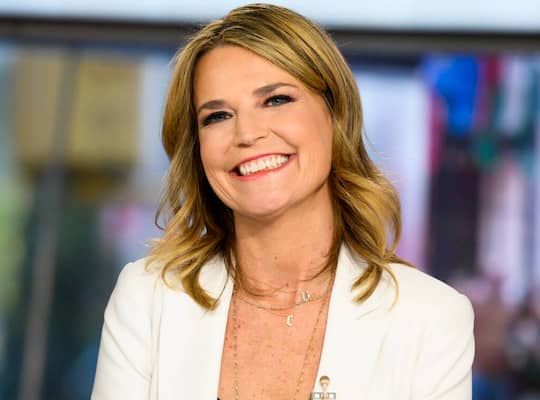 Guthrie was also a member of Order of the Coif and received the International Academy of Trial Lawyers’ Student Advocacy award for her work with victims of domestic violence.

Guthrie got her first job in broadcasting at ABC affiliate KMIZ, in Columbia, Missouri, where she worked for two years before going back to Tucson and a job with NBC affiliate KVOA in 1995. Five years after working in Arizona, Guthrie took a job at WRC-TV, Washington, D.C. where she covered major stories including the September 11, 2001, the 2001 anthrax attacks and attack on The Pentagon.

After working several years as a broadcast journalist, she chose to resume her higher education and did law. Guthrie worked for the law firm Akin Gump Strauss Hauer & Feld, where she worked as a litigation associate, specializing in white-collar criminal defense.

In September 2007, Savannah became a correspondent for NBC News. In 2008, Savannah covered Sarah Palin’s 2008 vice-presidential race from Fairbanks, Pittsburgh, San Antonio, Sioux City, Iowa, and Washington. On December 18, she was named White House correspondent for NBC News. In this capacity, Savannah contributed to all NBC News properties. Additionally, she is an NBC News anchor and substitutes anchor on NBC Nightly News.

On May 9, 2011, it was confirmed that Guthrie would become co-host of the 9 a.m. hour, alongside Al Roker and Natalie Morales, and the show’s Chief Legal Editor. On June 29, 2012, it was announced that she would co-anchor Today, replacing Curry. July 9, 2012, was her first day as co-anchor, alongside Matt Lauer.

Matt Lauer left Today on November 29, 2017, due to sexual misconduct allegations making Guthrie then become the host of Today alongside Hoda Kotb to this day. Since 2012, Guthrie has hosted the Macy’s Thanksgiving Day Parade on NBC, and the annual Rockefeller Center Christmas Tree Lighting.

Guthrie is 48 years old as of 2019. She was born as Savannah Clark Guthrie on December 27, 1971, in Melbourne, Victoria, Australia. She celebrates her birthday on the 27th of December every year.

Guthrie is the daughter of Nancy Guthrie and Charles Guthrie. She was born in Melbourne, Australia, where her dad was stationed for work. Her family went back to the United States and moved to Tucson, Arizona two years later.

Guthrie is named after her great-grandmother. She has a sister named Annie Guthrie and a brother called Camron Guthrie.

Guthrie is married to Michael Feldman an American communications consultant. The two became engaged in May 2013 while vacationing in Turks and Caicos. They tied the knot on March 15, 2014, in Tucson, with Guthrie announcing two days later she was four months pregnant.

On August 13, 2014, Guthrie gave birth to their first child, a daughter, Vale Guthrie Feldman. On June 7, 2016, she announced she and her husband were expecting their second child. They welcomed their son, Charles Max Feldman, on December 8, 2016.

Guthrie was previously married to Mark Orchard English-born BBC News presenter from 2005 to 2009. The two met while she was covering the trial of Michael Jackson. After Orchard divorced his first wife, journalist Anne Kornblut, he started dating Savannah Guthrie, and the couple married in December 2005. The two divorced in 2009.

Guthrie has an estimated net worth of $20 million which she has earned through her career as a broadcast journalist and attorney.

On October 15, 2020, Guthrie will be Moderating Trump Town Hall. President Trump and Democratic presidential nominee Joe Biden town halls will be held in place of the second presidential debate, which was canceled last week after Trump rejected the idea of the candidates appearing virtually in the wake of his coronavirus diagnosis.

Biden will appear at an ABC News town hall, while Trump will participate in a town hall hosted by NBC News. Both events are scheduled to start at 8 p.m.