Sheinelle Jones is an American journalist and a news anchor and correspondent for NBC News currently working as the co-host of the third hour of Today on weekdays.

Jones’ first radio assignment was in Springfield, Illinois, with WICS. Before joining NBC News, Jones worked at KOKI-TV, the FOX station in Tulsa, Oklahoma, and WTXF-TV, FOX O&O in Philadelphia, Pennsylvania. She’s been at Philadelphia station for over nine years. Jones joined today as part of Weekend Today on October 4, 2014. She became co-host at 3rd Hour Today in January 2019. As co-host at 3rd Hour Today and co-anchor at Saturday’s Weekend Today, Jones served six days a week. Jones left Weekend Today on December 21, 2019. In February 2020, Jones underwent surgery to remove lesions from her vocal cord and did not speak at all for two weeks; she was out of work for six weeks.

Jones is 42 years old as of 2020. She was born as Sheinelle Marie Jones on 19 April 1978 in Philadelphia, Pennsylvania, United States. She celebrates her birthday on April 19th every year.

Jones was born as the only child of the U.S. District Court Judge C. Darnell Jones II and his wife Evelyn A. Williams.

Jones is a married woman. She is married to Uche Ojeh. The two met when Sheinelle served as a tour guide for a year-younger Uche at Northwestern University, and soon afterward they began their relationship. The couple married in 2007 and they have three children together. 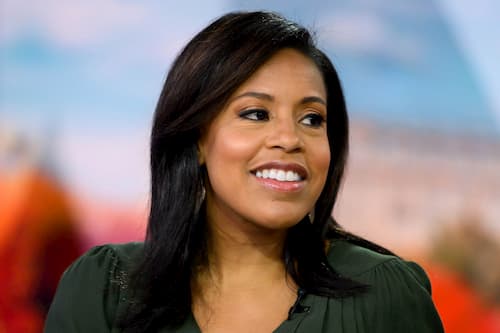 Jones has an estimated net worth ranging between $1 Million – $5 Million which she has earned through being a journalist.