Madison Taylor Baez is a 9-year-old actress and singer who is best known for playing young Selena, one of her “idols,” in Netflix’s Selena: The Series. She is also known as America’s “Anthem Girl” for singing with a Powerful & Soulful Voice never before seen in such a tiny girl.

She sings the National Anthem in front of thousands of fans in stadiums and arena’s for the LA Dodgers, Lakers, Kings, Galaxy, Rams, Harlem Globetrotters, Government Officials, and at many high profile charity events. Taylor Baez has been featured on the show Kids Say The Darndest Things with host and comedian Tiffany Haddish and gave a standing ovation performance of Beyonce’s “Listen”.

Madison has as well been featured on NBC 4 Access Hollywood, Inside Edition, ABC 7 News, Fox 11 News, NBC 4 News, KTLA 5 News, CBS 2 News, and Fox 11 The Good LA Morning Show. Madison’s heartfelt and courageous story of singing to her father to help him fight his 6 year battle with Colon Cancer is truly amazing!

She has also appeared in the film “The Tooth Racket” and filmed 11 national commercials for FujiFilm, Walmart, McDonald’s, Chevy, KB Homes among others as well as music videos for DJ Carnage and Nina West.

Taylor Baez is 9 years old as of 2020. She was born on February 24, 2011, in Orange County California, United States. She celebrates her birthday on February 4 every year. 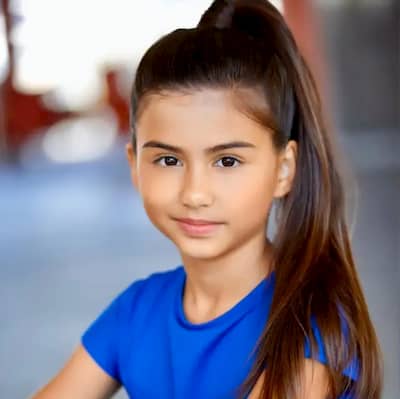 Taylor Baez’s height is not yet disclosed.

Taylor Baez is of Hispanic & Filipino descent. She is the daughter of Chris Baez and Mary Baez. It is however not known if she has any siblings. During an interview about Selena, Taylor Baez said, “My mom and dad were huge fans of Selena’s and they told me all about her, and I fell in love with her. I watched the movie, I researched her, she’s one of my idols and she inspires me to follow my dreams.”

Serratos is one of the main cast on Selena: The Series an American biographical drama.  It tells the story of Tejano singer Selena who rises to fame as she and her family make sacrifices in order to achieve their lifelong dreams. The series was released on Netflix on December 4, 2020.

She will be staring alongside Christian Serratos as Selena, Ricardo Chavira as Abraham Quintanilla, Gabriel Chavarria as A.B. Quintanilla, Juan Martinez as Young A.B., Seidy López as Marcella Quintanilla, Noemi Gonzalez as Suzette Quintanilla, and Daniela Estrada as Young Suzette.