Reynolds Wolf is an American Meteorologist/Correspondent currently working for The Weather Channel, where he co-host “AMHQ Weekend” which airs Saturday and Sunday 6-9 a.m. ET.

Since 2006, he has covered wildfires, floods, tornadoes, winter storms, heatwaves, and earthquakes. Over the past several years, Wolf has provided live reports from many hurricanes and tropical storms along the Gulf Coast, The Bahamas, Eastern Seaboard, and Hawaii. He spent much of the Spring and Summer of 2010 reporting on the oil disaster in the Gulf of Mexico and was the first in the network to fly with the U.S. Coast Guard over the former site of the Deep Water Horizon.

Reynolds Wolf joined CNN in 2006. While at CNN, he could usually be seen on CNN Saturday Morning, CNN Sunday Morning, and weekend editions of CNN Newsroom. Wolf also served as a weather correspondent and reporter on other CNN programs. He left CNN in May 2012.

When he left CNN, Wolf made his debut on The Weather Channel as part of their Hurricane Isaac coverage on August 26, 2012. He hosted different news and now turned to work at AMHQ Weekend. 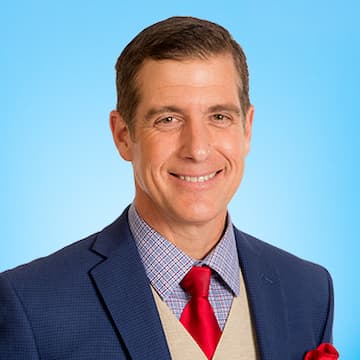 Wolf works at CNN where he works alongside other famous CNN anchors, reporters, meteorologists, and sports anchors including;

Wolf is 51 years old as of 2021. He was born Reynolds Scott Wolf on March 16, 1970, in Charlotte, North Carolina, United States. He celebrates his birthday on the 16th of March every year.

Wolf stands at a height of 5 feet 9 inches.

Wolf has managed to keep his personal life away from the limelight hence he has not disclosed any information about his parents. It is also not known if Wolf has any siblings.

Wolf is married to Erin Cogswell Wolf and together the couple is blessed with four children, three girls, and one boy. The family lives near Atlanta, Georgia. During his free time, he spends time with family, exercising, or a little of both, and chasing Beauregard, their Golden Retriever.

Wolf has an estimated net worth ranging between $1 Million – $5 Million which he has earned through being a meteorologist and journalist.

The table below answers some of the frequently asked questions about Wolf.