She attended Concordia University Irvine and graduated with a bachelor’s degree in biology in 2012. She has a new pop-culture podcast, “Click Bait with Bachelor Nation,” and when she’s not co-hosting, she loves to travel and is passionate about exploring all the world has to offer; all she is missing now is a partner with whom to share these experiences. She is also a former phlebotomist.

Adams made her debut in The Bachelor franchise in 2019 on the 23rd season of “The Bachelor,” when she appeared on Colton Underwood’s season of The Bachelor. She was one of the final two contestants, alongside Hannah Godwin, both of whom were eliminated when Underwood decided to end the show to pursue Cassie Randolph.

After being eliminated from The Bachelor, in August 2019, Adams appeared on season six of Bachelor in Paradise where she started dating fellow contestant John Paul Jones. The two split in September of 2019, before the show’s finale.

On November 5, 2020, Adams was chosen as the replacement for Clare Crawley on season 16 of The Bachelorette after Crawley’s exit. She is hopeful and determined to find love again. With her parents’ 32-year marriage as her example, Adams is ready to find that forever love she has been waiting for – the kind her parents have shown her is possible. 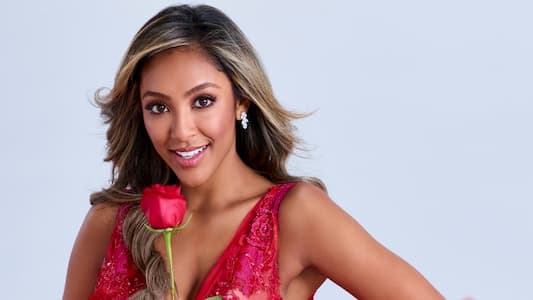 Tayshia is 30 years old as of 2020. She was born on September 4, 1990, in California, United States. She celebrates her birthday on the 4th of September every year.

Adams was born in Santa Ana, California to parents Rosario and Desmond Adams. She has three siblings and was a Girl Scout for 12 years.  Spending time with her family is one of her favorite ways to enjoy her days, and for her, family is everything!

Tayshia was married to Josh Bourelle from 2016–2017. The two had met in college and they got engaged after graduation. They got married on April 2, 2016, and officially separated on August 21, 2017.

During her first one-on-one date with Brendan Morais during her debut on The Bachelorette Season 16, Tayshia opened up more about her first marriage.

“There’s a lot to me that makes me me,” she said on the show. “This past year and a half has been kind of hard for me, and it’s actually because I was married and I got divorced.” Tayshia said she could “sense we weren’t doing well,” adding, “I think that’s why I fought so hard just to try to do as much as I possibly could.”

Tayshia has an estimated net worth of $1 Million as of 2020.

After Peter Weber’s season of The Bachelor wrapped in March, ABC dropped photos of the 32 contestants for Clare Crawley’s The Bachelorette 2020. After Tayshia took over, she inherited 16 men from Clare’s season and added four of her own.