Chris Gloninger is an American Meteorologist, Climate Change Reporter, and Emergency Management Instructor working at KCCI 8. He has been working for the station since joining in July 2021.

Chris Gloninger is an American Meteorologist, Climate Change Reporter, and Emergency Management Instructor working at KCCI 8. He has been working for the station since joining in July 2021.

Gloninger serves as the chief meteorologist at KCCI 8. He is also working at National Disaster Preparedness Training Center (NDPTC) where he serves as an instructor since October 2019. In addition to this, he also works at Boston University School of Medicine, Division of Graduate Medical Sciences where he serves as a healthcare emergency management clinical instructor since August 2019. During his time at National Disaster Preparedness Training Center (NDPTC), he lectures on extreme weather events including riverine flooding, coastal flooding, and implemented supplemental learning resources to support curriculum.

During his time at Boston University School of Medicine, Division of Graduate Medical Sciences, he pert-time organizes interactive and engaging presentations, aligning delivery with unique knowledge and education level of different audiences. Gloninger had also worked for other stations prior to joining KCCI 8. For instance, he previously worked for NBC 10 Boston where he served as a Meteorologist & Climate Change reporter from June 2016 till his departure in June 2021.

Gloninger also interned at several stations including WABC in New York and NOAA in Upton, NY. Hwe went to Plymouth State University where he attained his BS in Meteorology and was awarded a CBM from the American Meteorological Society where he presently serves on the Broadcast Board. Gloninger has also travelled to several states and countries including Milwaukee, WI; Rochester, NY; Boston,MA; and Albany, NY.

Gloninger has also managed to enclose all different types of weather including EF 4 tornadoes, blizzards, hurricanes, historic ice floes, and Noreasters. Furthermore, he was also sent to enclose hurricanes in Florida, Texas, New York, and North Carolina. Gloninger has also managed t win several awards and honors ever since he started his journalism career. For instance, he received two NBC Gem awards, three EMMYs, and Wisconsin Broadcasters Association awards. Whenever he is not busy working, he enjoys spending his free time with his family and friends. He also enjoys outdoor activities like kayaking, swimming, going to the beach, and fishing.

Gloninger works at NBC Boston where he works alongside other famous NBC Boston anchors, reporters, meteorologists, and sports anchors including; 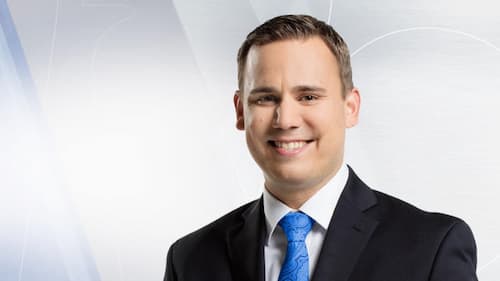 Gloninger likes to keep his personal life private hence has not yet disclosed the year and month he was born. It is therefore not known when he celebrates his birthday.

Gloninger stands at a height of approximately 5 feet, 8 inches.

Gloninger has managed to keep his personal life away from the limelight hence he has not disclosed any information about his parents. It is also not known if Gloninger has any siblings.

Gloninger is married to Cathy. The couple married in April 2016. His wife is a Muskego native.

Gloninger has an estimated net worth ranging between $1 Million – $5 Million which he has earned through being a journalist.

The table below answers some of the frequently asked questions about Gloninger.