Gurvir Dhindsa is an Indian-born American Journalist serving as news anchor and reporter for  channel CBS46. she anchors the news aired from the channel CBS46 on the weekdays in the morning from 4:30 to 7 am.

She began her career in media in 1997 as a news anchor for Fox 5’s Good Day Atlanta. Gurvir stayed there until 2000, when he relocated to Washington, D.C., where he worked for a number of stations until 2011.
In January of 2000, she began working for WUSA-TV, Channel 9. She was laid off a few years later, on the same day that their Australian shepherd dog Cutter died. Dhindsa returned to Good Day Atlanta in 2011 to replace Suchita Vadlamani, who left to raise her child. Gurvir has won various honors for her anchoring and field reports over her media career. She has received multiple Mississippi Associated Press honors and was nominated for an Emmy for her coverage of the Atlanta Olympics.

Dhindsa is known as an American reporter and journalist of Indian heritage. She is the morning news reporter for the CBS 46 network. She attended Middle Tennessee State University in Murfreesboro, Tennessee where she received a degree in Journalism. After her graduation, she got her first job in her hometown of Nashville before her career took her to Mississippi, Atlanta, and Washington, DC.

Dhindsa works at CBS46 where she works alongside other famous CBS46 anchors, reporters, meteorologists, and sports anchors including; 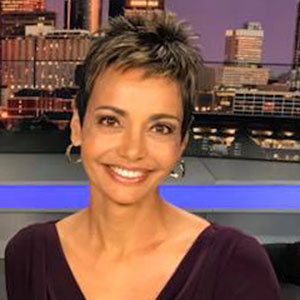 She has a degree in Journalism from Middle Tennessee State University.

She was born as the eldest daughter to Harbans and Dev who were teachers at the Alabama Institute for the Deaf and Blind. Dhindsa has two sisters, Gurjeet who is a teacher, and Tina, a doctor.

Dhindsa is married to Tom Sater a meteorologist at CNN International in Atlanta. The couple has a pair of twins, born in 2008.

She joined CBS46 in October 2017. She anchors the CBS46 Morning News from 4:30-7 AM Monday through Friday. Dhindsa loves waking up with Atlanta every morning, but she is delighted to get out in the community to share the “good news” stories that make our area so special. Gurvir’s favorites are “Positively Georgia” which highlights some of the amazing people making a difference; as well as the CBS 46 Surprise Squad, which honors those who go above and beyond to help others.

Dhindsa has an estimated net worth ranging between $1 Million – $5 Million which she has earned through being a journalist.