Karli Ritter is the Morning Meteorologist for FOX4 since joining the station in March of 2007. She forecasts for FOX4 News from 5:00-9:00 a.m. She attended Florida State University where she earned a Bachelor of Science degree in Meteorology in 2004.

Her passion for weather began at a young age while she was growing up in central Florida. In between the afternoon thunderstorms, Ritter would frequently track every hurricane in the Atlantic Ocean on her own personal tracking map. Then Ritter saw a waterspout in the Florida Keys and was hooked!

She then went to Florida State University to study Meteorology. During her time at FSU, Ritter’s involvement with a student-run weather show started her on the path to becoming a television meteorologist. Upon graduation, Ritter worked in Sarasota, Fla, and Montgomery, Ala.

Since moving to Kansas City, she has become involved with numerous charities around town and loves serving as emcee at their fundraisers. Additionally, Ritter earned her Certified Broadcast Meteorologist seal in November 2007 from the American Meteorological Society. She also enjoys storm chasing but has scaled back now that she has a daughter and son to chase instead.

During her free time, she enjoys traveling, cooking, yoga, spending time on a boat and playing or watching any sport. 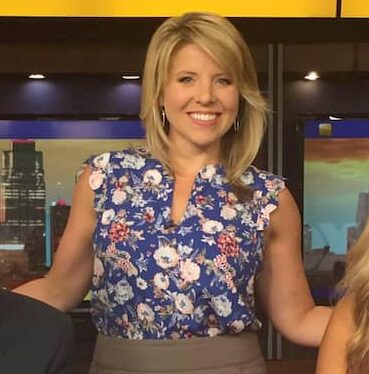 Ritter was born and raised in Florida, United States. She likes to keep her personal life private hence has not yet disclosed the year and month she was born. It is therefore not known when she celebrates her birthday.

Ritter has managed to keep her personal life away from the limelight hence she has not disclosed any information about her parents. She has one younger sister.

Ritter is married to Chris Lockhard and the couple is blessed with two children, a daughter and son. They have two dogs, named Luci Lu and Kona and they reside in Kansas City, Missouri.

Ritter has an estimated net worth of between $1 Million-$5 Million which she has earned through her career as a Meteorologist.

Information about how much Ritter receives is currently under review and will be updated as soon as the information is available.